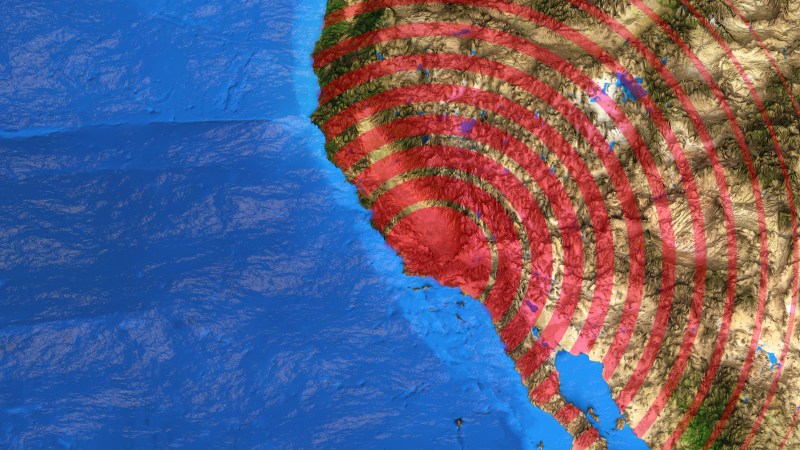 Earthquakes are highly destructive when they strike, and unlike many other natural disasters, they often hit with minimal warning. Unlike hurricanes and floods, and even volcanoes to an extent, earthquakes can be very difficult to predict. However, in recent decades, warning networks have proliferated around the world, aiming to protect affected communities from the worst outcomes in the event of a large tremor.

ShakeAlert is the name of the earthquake monitoring project run by the United States Geological Survey, which has just announced that it now offers early warning services to the entire west coast of the United States. Let’s take a look at how earthquake monitoring works, how that feeds into early warnings, and how this can make a difference in the case of a major quake.

When an earthquake begins at a geological fault line, it produces a variety of types of waves, known as primary waves (P-waves), secondary waves (S-waves), and various types of surface waves. P-waves travel at roughly 5-8 kilometers per second, around 1.7 times faster than S-waves, and rarely cause major damage. Surface waves are typically slower again. Thus, by monitoring seismographs for characteristic P-waves, it’s possible to get an advance warning that nastier shakes are coming.

Depending on the distance from the seismograph to the quake’s epicenter, the warning time can be anywhere from a few seconds to a minute or two at most. In the case of ShakeAlert on the West Coast of the United States, the USGS estimates the system will provide up to ten seconds of warning to users’ phones in the event of a magnitude 5 quake or greater.

This time is based on the proximity of cities to the fault lines themselves, with shorter distances to the quake epicenter providing less time for the P-wave to get out ahead as an early warning for the coming S-wave. This contrasts with the early warning system set up in Mexico City; with the population center much farther from the epicenter of typical quakes, past tremors have seen citizens given from 20 seconds to 2 minutes of warning prior to the arrival of the stronger-shaking S-waves.

Ten seconds may not sound like a lot of time, especially given that most users will receive warnings via smartphone. However, in many cases, it’s still enough to make a valuable difference. It only takes a few seconds to climb down off a ladder, switch off dangerous machinery, duck away from windows, or crouch in an emergency exit and hang on to the wall. These simple measures alone can save thousands of injuries across a city affected by an earthquake. It’s similar to the unfairly maligned Duck and Cover method from the 1950s, designed to help minimise casualties in the event of a nuclear blast. Simply getting low to the ground and avoiding falling objects and breaking glass in the event of an earthquake can leave you feeling far happier in the immediate aftermath of the event. Footage from the 1989 San Francisco earthquake shows people reacting with confusion and delay when the rumbling starts. A ten second warning, combined with the knowledge to drop, find cover, and hold on, would have made a significant difference to many.

A further boon of the system is that it can be set up to automatically take preventative actions in the event of detecting an earthquake. Earthquakes can cause havoc to infrastructure, with violent shaking cracking water and gas pipes, and even jamming doors shut at fire stations and other emergency facilities. At best, this adds frustration in an already difficult time; at worst, it puts lives at risk and exponentially increases the damage bill racked up by the quake. With a properly configured warning system in place, however, this can be avoided. Since the first systems were installed in the US in the early 2000s, they’ve been used to automatically open doors and raise sirens at fire stations, as well as set up to switch off valves in gas and water lines to prevent leaks and damage. In fact, one of the first ever earthquake warning systems in the world was UrEDAS, or Urgent Earthquake Detection and Alarm System, used by Japan’s railways to slow down high speed trains in the event of an earthquake detection. This was the first system to use P-wave sensing for earlier warning of pending earthquake events.

ShakeAlert won’t be able to prevent all the negative impacts of future earthquakes. It will still take time to detect quakes, so the places nearest the epicenter will still face damage without warning. However, it should serve as a capable tool that does help reduce the overall pain and suffering of earthquakes on the West Coast on a grander scale. With similar systems already proving their worth in Japan and Mexico, expect them to become a regular fixture in earthquake-prone regions around the world.

A Mini USB Display For Your PC Desktop

16 mins ago admin
Welcome to MalwareDefinition.com